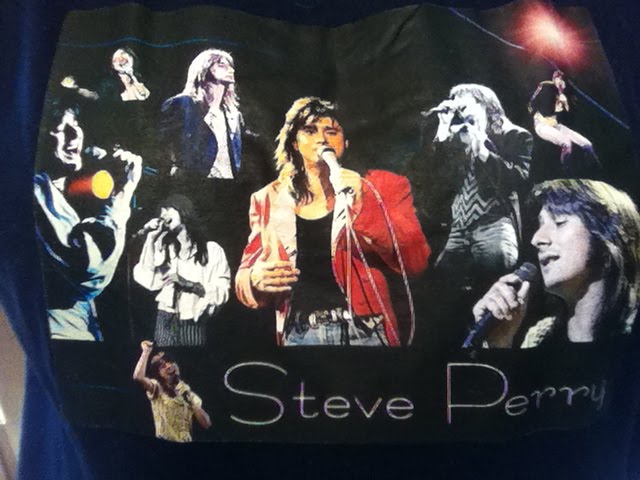 The man is a gorgeous sexy BEAST!! I just want to eat him up!!

2 other things from camp to tell you about....

Hey Stephen, before I get started today, I wanted to write a quick disclaimer warning to those who cannot handle the type of camp stories I am about to tell....

Okay, so while at camp, I participated in two activities that were quite awesome, and I wanted to quickly share them with you before I get busy doing other stuff today.

The first was the Clit Washer.  Yes, you read that right.  It is a power-washer for the clit.  Lemme tell ya, that thing is INTENSE.  In fact, I got up and started looking down at the ground, walking around----well, that is, after 15 minutes where I couldn't walk at all----and I said, "I think my clit fell off around here somewhere."  It got a lot of hilarious laughter from the crowd around us, but I was friggin' serious.

Here is a photo of it, and like I said above, IT MAY BE TOO GRAPHIC and/or NAUGHTY for most people to see, so get the hell outta here if you're a wuss about such things: 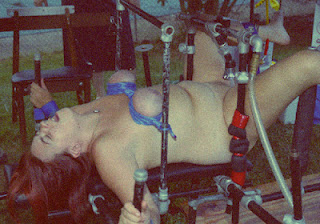 It may LOOK primitive, but it's designed to keep you strapped down so you cannot move.  The rope around this person's boobs really is not necessary. But as you can see, your legs are straddled, and that's where the man who owns the machine sits, with a welding mask on, (not kidding), and he uses this high powered pressure washer thing (which is adjustable, to lower and higher speeds, and pressures, and temperatures of water too), and he just goes to town on your clit.  Until it falls off.

No, no no, I am only joking about that.  It didn't fall off.  But it was pretty cool because you have multi-orgasmic spasms for the entire time you're on it, and I was on it for at least a half hour.  My muscles tensed up so much, I couldn't walk afterwards.  My legs were shaking all over the place, but it was amazing.  I guess when I was in my endorphin-rushed stupor, I said, "I can't ride it again today but can I come back tomorrow?" which again, garnered a lot of hilarious laughter from those around who were watching.

I have no problem with people watching, actually.  What do I care?  I put a blindfold on, and nobody can see me!!! Yay!!!  (Mind fucks are fun, even if you have to do them to yourself sometimes).

Anyway, so then the other thing I participated in, was the Orgasm-a-thon.  I won 2 awards for that one.  It was a competition, for 45 minutes of stimulation to achieve the most orgasms, the best types of orgasms, etc., and I won for "wettest," and for "best bondage."  (Yeah, it's a curse really, if I'm not tied down, I will kick someone through a wall.  Seriously, I have done that before).  The intensity of my orgasms actually make me LEVITATE too, sometimes.  It's freaky.  But apparently, according to the gay man who was in charge of the competition, even HE said, "DAMN girl, that was HOT!"  So, okay, that's cool with me.  However, I have scared some vanilla guys in my past with it.  They had never seen such a thing before, and I would venture to guess, probably never since.

Soooooo I lay down face-up on this leather swing that is connected on all 4 corners with chains, and attached to this steel frame.  Pete wraps cuffs around my ankles and my wrists.  He also ties some rope around my shoulder area, and then puts a blindfold on me.  Then the hitachi comes out.  And from that point on, it was a friggin' wild ride.  And 45 minutes STRAIGHT of this, well, needless to say I felt like my clit had been BURNED OFF this time.  But, strangely enough, it felt good.  Go figure.

Now, these are 2 activities that I have never tried before in my entire life.  I don't do these things daily, it's not my favorite hobby, (though it is in the top 10), and I am NOT, I repeat, I am NOT a freak for liking either one.  I do, however, absolutely ADORE forced orgasms.  I even like a little denial thrown in for fun.

I know that most vanilla people would cringe, or their jaws would hit the floor when I tell them this stuff, which is why I don't.  But in addition to doing fun activities like these, we also attend classes and learn awesome things that help everyone stay safe while they play.  So it's all good.

You just haven't lived until you've ventured out of your comfort zone.

I also learned that the clit washer is too intense for me, so I don't expect to ever do it again.  The Orgasm-a-thon, however, was fun as hell.   I had 30 or more orgasms in 45 minutes.  Not too bad, eh??  And these are levitating, intense, screaming wet orgasms too---not just your wimpy "porno-fake" kind.  I tend to get the giggles while I'm in the endorphin fog sometimes, and it was pretty funny at one point, so several people who gathered around to watch were giggling too.  It's all fun, and nobody gets hurt.

Well, I'll let you think about that today.  :)  Gave ya some nice mental images, I hope.  You give me music and songs, I give you naughty mental images.  It's all good, and really it's a win-win for us both!

Yep, Mr. Perry, you've never met a girl like me before, that's for damned sure.

I'm pretty sure you wouldn't be able to handle me either.

Nope, you really wouldn't know what the hell to do with me, wouldja?!  WINK!  Most guys don't.

I love this photo of Steve!! ROWR!!

God Bless that man and his gorgeous long silky HAIR...ok, and his VOICE too...